Wildwind founder Simon Morgan is a Hobie sailor of over 35 years and competed as recently at the Hobie 16 Worlds in Spain. As well as being a long-time supporter of Hobie events in Europe. Joe Bennett from Joyrider TV is a Hobie Tiger sailor who has also competed at various Hobie Tiger World & European Championships. Neither needs an introduction to the Hobie sailors as they have had such a long-time commitment to the Hobie Class. David concluded, we welcome Wildwind Holidays and Joyrider TV not only with a partnership and their very generous sponsorship but as long-time Hobie friends.

Simon had this to say about the tie up

‘As anyone who knows me will know I am an out and out Hobie aficionado, having first bought a second hand 16 in my twenties. I’m particularly fond of sailing in strong winds, and thus my love affair with the Hobie 16 led me to drive one on a trailer behind a VW  campervan to Greece on a sabbatical from work in 1987 and having discovered all that I had heard about the windy fishing village of Vassiliki to be true, I sold my house in London and Wildwind was born and today is recognised as one of the top sailing holiday companies in the world.

I love to race and have taken part in numerous World and European championships for over thirty-five years and in 2001 Wildwind, with the immense support of Hobie Cat Europe and the local authorities, organised the first Hobie 16 European Championships to be held in Greece – an event that attracted 118 teams and with the 3 races of the final day of Gold fleet being sailed in winds from 25 to 40 kts!   This event was carried to a massive audience around the world by Sky TV and anyone who is keen to watch Hobie sailing at its very best and Olympic medallist Mitch Booth suffering his first capsize in over ten years should click here

I am thrilled to announce our new arrangement with the IHCA and Joe Bennett and I and the management team of the IHCA are particularly keen on encouraging more members into the Hobie cat associations around the globe, a target we hope to be able to achieve first of all by making the IHCA’s regular bulletins and newsletters more engaging, especially with the use of more video and with material that will enhance the value of being a member’.

Speed stick expert Joe added the following.   ‘I have been lucky enough to have been involved with catamaran racing since my early teens and some 27 years ago came to work at Wildwind as a beach instructor.  During my time there I have seen the company grow not only in numbers of boats (we now have over 70 cats and dinghies on our beach) but in professionalism in every area, helped I would hope to say at least a little by my long tenure as Beach Manager and my experience racing Hobie Tigers and Tornados again at numerous World and European championships.  Around 5 years ago I decided to share the experience that I have built up over the years with a wider audience than just our regular clients and my Youtube channel, Joyrider TV,  has now had over 6 million views and 26,000 subscribers.

With this sponsorship I hope that my videos will serve a number of useful purposes; firstly they should give all cat sailors a sense of excitement and a reminder of just why we enjoy our sport so much perhaps when we are sitting down for an office lunch break, secondly that they will provide a wealth of information not readily available in one place on subjects such as tuning, repairing, and sailing, and lastly to offer another medium where other multihull enthusiasts can connect with me and with other like minded sailors  – for example at my regular Q & A sessions.

I look forward to seeing you not only online but at one of our bases in Greece or Mauritius or at an event I’m competing in near you!

Hey Simon, great to hear you have a continued collaboration with Hobie. Happy to offer a comment to your promo. “ the Hobie way of life fits perfectly with the Wildwind passion for sailing in Vasiliki, one of the best bays in the med. No better way to introduce the next generation to our fabulous sport at the ideal family sailing holiday destination.  Mitch

Chris Draper, multiple World, and European championships and a bronze medal in Sailing at 2004 Olympics competing in the mixed 49er.

I was lucky enough to work at Wildwind for a short period before beginning my Olympic and professional sailing career.  My greatest memories of Vassiliki are simply blasting around in a selection of high performance dinghies and catamarans surrounded by great people and amazing conditions. It’s an incredible environment, flat water, great afternoon winds, just a fantastic sailing destination. They create a holiday experience with a perfect balance of fun and professionalism. Returning years later with my family, Wildwind continues to create incredible holiday experiences, great boats, beautiful conditions, all shared by great guests that just keep returning year after year.

We first heard about Wildwind when you sponsored some prizes, as far back as the Tiger Worlds in Langabaan in 2008. Since then, we have been keen to visit one of your venues, and eventually, in 2022, we got to your Wildwind venue in Vasiliki, Greece. Lucinda and I thoroughly enjoyed our time with your team. It was here that we were officially introduced to Joyrider TV, although we had seen a few clips on Youtube. So glad to see and experience your passion. 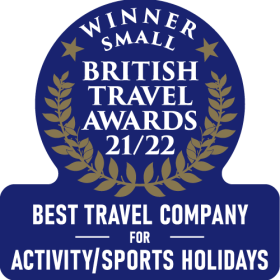