The Hobie 18 was introduced in 1977 as the performance cat that would take the Hobie family of boats to the next level. Designed with symmetrical hulls and daggerboards. The boat also incorporated equipment not available on earlier Hobie designs. Two prime examples are the Roller Furling Jib and an integrated traveler track on the rear crossbar. Another significant departure from previous Hobie designs was the loose footed Mainsail. Integral hiking / trapeezing wings Spring-loaded pivoting daggerboards controlled with a single line Mylar / Dacron taffeta sails First Hobie to be designed with a Comptip New rudder castings that would be retrofitted to the 18 and be standard on all future models.

The boat was an immediate success, and competitive fleets sprouted up in North America, Australia and to a lesser extent in Europe, where the boat was built with an all-aluminum mast, tapered above the hounds. The 17 became an ISAF International Class in 1990.

The advertised weight of the newly introduced Hobie 18 was 400#. But the early boats were far heavier than that. Hobie was selling boats as fast as they could build them, and not much attention was paid to the amount of fiberglass and resin that was used. During the early to mid 80’s hull weights started dropping but premature failure at stress points became problematic. This failure was addressed by adding shroud anchors that spread the load at the shrouds and the same part is used to strengthen the boat at the anchor points for the front crossbar. Boats built from 1986 to present generally will weigh in very close to the factory specification.

The Hobie 18 is probably the most versatile catamaran ever built. There are still active and competitive fleets in many areas of the country. It is equally enjoyable both as a racer and as a daysailor. With the jib furled, it can be easily single handed like the Hobie 14, or wings can be added and it becomes a very manageable family daysailor/cruiser. It can easily be sailed off the beach, and yet is much less “active” than its smaller cousins, stable and forgiving without being as technical and “spirited” as the Hobie 20 â€¨For those looking for a bit more of a thrill, you can pick up a SX rig and/or a spinnaker kit can be added to any incarnation of the Hobie 18.

The Hobie 18 is once again incredibly versatile. The boat handles well over a wide range of conditions. It will point a bit higher than its asymmetrical cousin, although it is a bit wetter in heavy winds because the trampoline closer to the water. It is built like a tank, and will stand up well to as much wind as you are comfortable sailing. In extremely light conditions it will not live up to its Portsmouth rating, but when sailed by a competent crew will still keep up with both the Hobie 16 and the Hobie 20. The tall bows make it very difficult to “pitch pole” and it is a much smoother ride than the smaller Hobies. The Hobie 18 can be sailed well with relatively inexperienced crew, because while there are many more adjustments than on the Hobie 16, they are not nearly as critical to the overall performance of the boat as they are on the Hobie 20 or the Hobie Tiger/Wildcat.

While the original Hobie 18 SE has seen no significant changes during its lifetime, Hobie added wings and introduced the Magnum 18 in 1984. Sometime around 1990, Hobie added longer wings, a taller mast and vertical cut Mylar sails in and introduced the Hobie 18SX. Very shortly after the SX hit the showroom, the Hobie Miracle 20 made its debut and the performance oriented sailors embraced it and never looked back at the Hobie 18 SX. There are very few SX’s still available, and the only nationally active Hobie 18 racing class is the original incarnation, the Hobie 18 SE.

In 2004 Hobie ended production of the Hobie 18 in any configuration. In 2011 Hobie Cat Australia made a limited run of 10 sets of hulls for loyal owners that wanted many more years of sailing from their Hobie 18 platform. 9 of those sets were shipped to the USA.

The factory 3:1 downhaul can be upgraded to as much as 8:1, and can be brought out to each side of the boat so it can be adjusted from either side of the boat. A positive Mast Rotation system can be used to keep the mast rotated in light air conditions when sailing off the wind.

What to look out for in a Used boat

The Hobie 18 is a very well constructed boat however two common problem areas are soft spots in the Deck just in front of the rear cross bar where the skipper sits. Also be sure to inspect for cracking where the front crossbar attaches to the hull. If you are getting an excessive amount of water in the hulls, the most common point of entry is the dagger board trunk.. Check the seal both at the top and the bottom. The area at the top is very often where you will find the problem. As with all Hobies, be sure and drain water out of the hulls after use, and leave the port off to allow humidity to escape. Used boats are generally priced in the $1000 to $3500 range depending on age, condition, and whether or not it has wings. 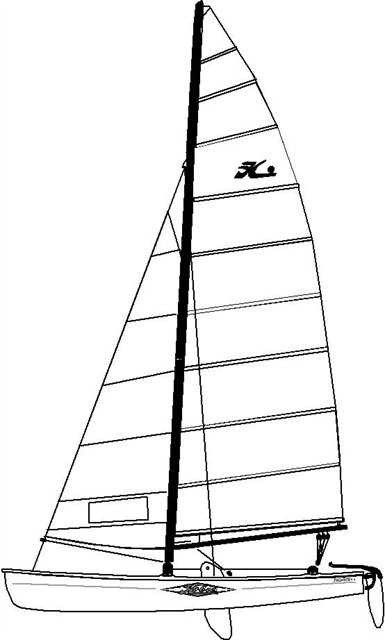 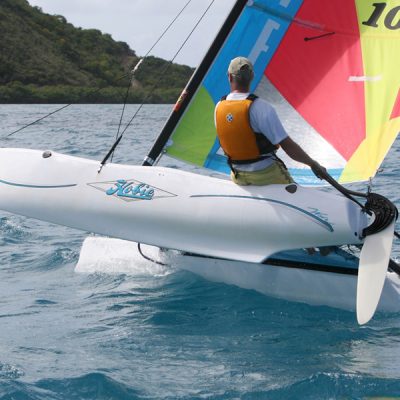 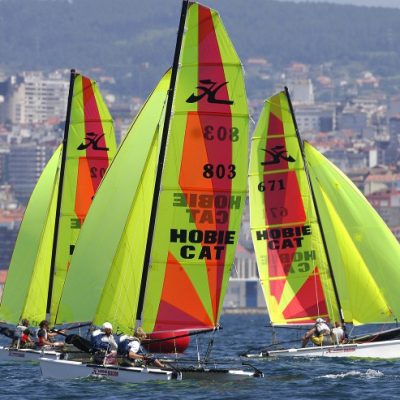 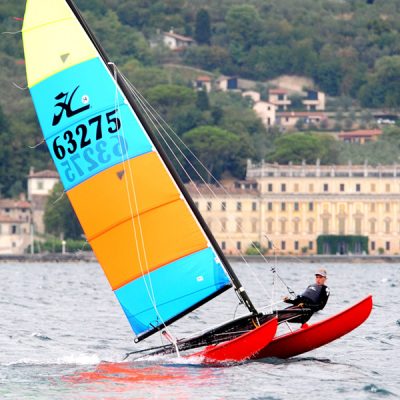 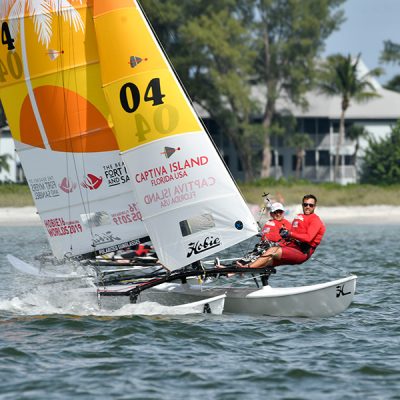 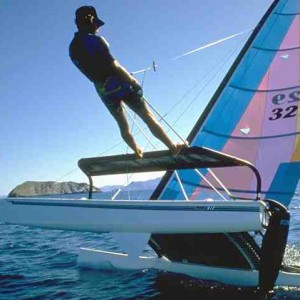 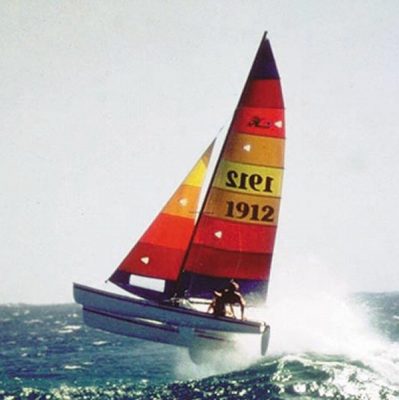 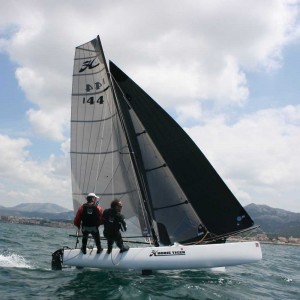 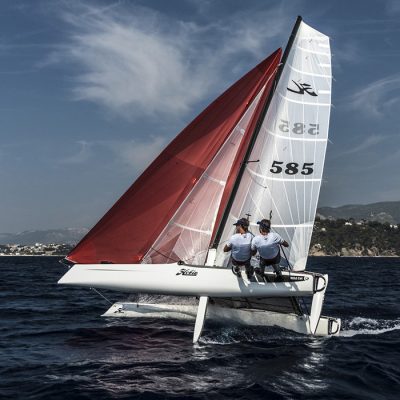